I’m not vegan but ‘some of my best friends are’ – lol. No, really. This is a post for Vegan Month of Food, inspired by my friend Pip’s new blog: ‘Animal Rights and Peas‘ (great title, huh?) Vegan Month of Food means that all over the internet vegans, like Pip, are blogging about veganism as much as they can through this month.

I like vegan food and so have collected some good vegan recipes over the years, both for when I am sharing food with vegans and just because they taste good.

Vegan food is thrifty food! Lots of vegan food uses cheap wholefoods. Vegan baking is heaps cheaper than ovo/lacto baking, because milk and eggs and butter are so expensive these days.

If you are sharing food with vegans, baking is your friend. Just replace butter with oil or margarine, milk with soy milk and eggs with mashed banana or grated apple and (usually) it will turn out pretty good. Some baking tastes better vegan. I much prefer vegan cupcakes to lacto/ovo ones, because they aren’t so sickly and rich.

I’ve heard people say they are nervous to have their vegan friends over to share food because they are worried about getting it wrong, or that their vegan friends might judge their eating habits. I reckon your vegan friend is probably just happy to be visiting you AND to have been offered something vegan to eat. Don’t sweat it!

Here is a vegan recipe that I make quite a bit. It is quick, easy and most importantly, kids will eat it! It makes a good muesli bar thing for lunchboxes or is nice as a ‘sweet’ with a cuppa.

Preheat oven to 200 C. Boil together dates, water, tbsp sugar; simmer until dates soften. Combine all other ingredients except the jam in a bowl – stir until well-mixed. Mixture will be like damp crumbs. Take dates off heat, stir in jam until well-mixed. Press half dry mixture into a low-sided baking dish. (Press it in really well; get your knuckles in there!) Spread fruit mixture over crust.

Tip remaining crust mixture on the top and lightly press down. Bake for 25-30 minutes, or until top is lightly browned. Cut into bars when cooled. 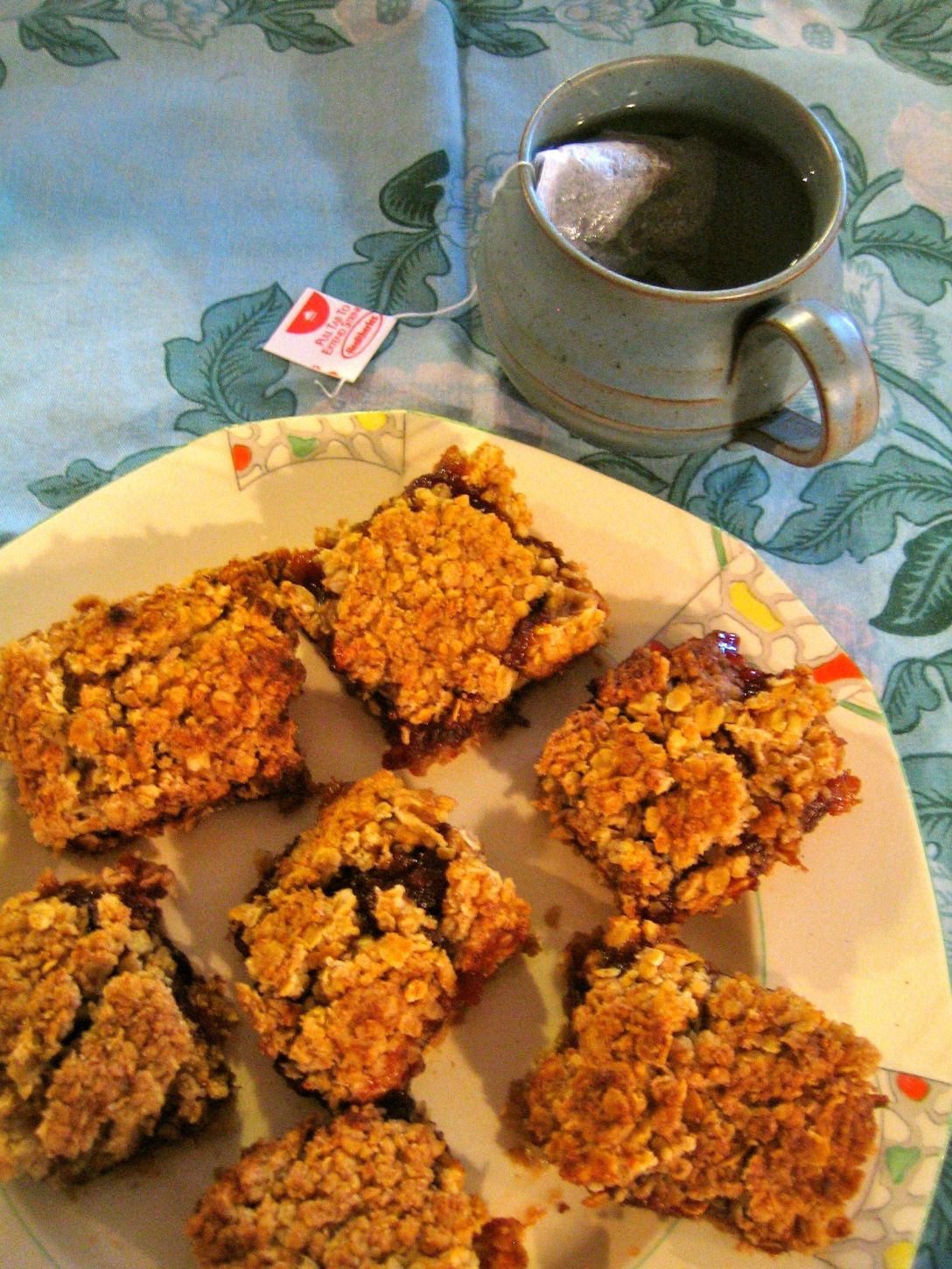 (I have no idea where I got this recipe from as I copied it out years ago. If you recognise it – let me know so I can credit the source.)

Anyway, that’s my two cents for Vegan Month of Food.

6 thoughts on “vegan month of food”