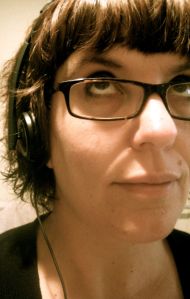 ‘My headphones / they saved my life’.

Bjork said of this song:

“I did Headphones with Tricky, sort of a thank-you to a friend who always sent me tapes with his favourite music. I saw that as one of the most beautiful and valuable gifts someone can give you. Such a tape says so much about someone’s personality and about what that person wants to tell you. I always saved a tape like that until it was evening, all the work had been done, I was all alone and had taken a bath. Then I’d lie on my bed, with my headphones on, to slowly fall asleep, listening to that tape.”

I love making mixes, although .mp3s have kind of killed the beautiful tangibility of the mix-tape/mix-cd…sharing a data-stick just ain’t the same. I don’t send as many mix-cds as I used to, though, because you can’t even be sure that people have cd-players anymore, right?

If you want to make me really happy, send me a mix-cd. I have fantastic mix-cds from Sarah, Emma and Melissa that they probably long forgot they made for me…but I treasure, and when I listen to them I feel the person who made it for me very strongly through the music, just like Bjork says.

Anyway, I didn’t start out writing this post about mix-tapes, I was going to write about podcasts….tangent…

I spend a lot of time wearing my headphones…..when I walk….to get to sleep….on public transport. These ones are beautiful Sennheiser ones which F bought me for my birthday last year. They sound incredible and definitely create a little solo-world of sonic bliss. I also get a kick out of the fact they look very much like the ones I had in the 1980s when I got my first Walkman.

My friend Emma posted a couple of times recently about podcasts – read it HERE. I’ve found her podcast posts really helpful and have started listening to many thanks to Emma and the people who fed her some suggestions.

I thought I’d share the podcast inspiration with some recent discoveries of my own lately:

If you enjoy Sound Opinions and love music esoterica and discovering new music, I can’t recommend highly enough the podcast ALL SONGS CONSIDERED. The hosts are wonderfully funny and sincere, the level of music geekery is high, and I haven’t listened to a single episode where I didn’t fall in love with at least one and often more of their selected songs. The focus of the show is SONGS not bands or albums – they are looking for stand-out songs, and they might even say ‘Don’t like anything else off this album, but this song is great.’ I appreciate the emphasis on the individual songs in the show. It’s like have a friend with great taste make you a mix-tape every week. It’s the only podcast which I sometimes re-listen to multiple times. For music-nerds only – if you are the sort of person who says ‘I don’t really have strong opinions about music – I like a bit of everything‘ this is not the show for you.

***Another tangent – I got to meet NICK BOLLINGER at work last week. He came to do a talk with Chris Bourke. I freakin’ LOVE Nick Bollinger’s music reviews on Radio New Zealand and in the Listener. He is such a warm-hearted, considered, thoughtful reviewer and he writes so well. He also has a lovely voice on the radio. I was psyched to meet him and planned to tell him how great I think he is, but then of course when he walked in, I came over all socially awkward and instead just said a professional hello and explained where he should park his car. Gah! Damn you, shyness! I did get to shake his hand though. Like his music reviews, it was very warm.)***

I love history and biography – if you don’t, skip this paragraph. My other recent discovery is BBC GREAT LIVES podcast.  In this show, host Mathew Parris invites a famous person who selects a ‘great life’ they would like to examine, then they, plus an expert on the selected subject, examine the life of that historical figure. It is ace – in a 30 minute show I can go from ignorance about a person, to being able to hold up my end of a conversation about them, should I need to! I say ‘historical figure’ but they often look at contemporary ‘great lives’ – the most contemporary I’ve hard so far was singer Kirsty McColl, who died in the 1990s. My favourite episodes so far were on Gertrude Stein, Wittgenstein,  Dylan Thomas and Goya. I also love how the haughty host abruptly ends each podcast with a clipped ‘Goodbye’.

I’m a Buddhist and there are two great Buddhist podcasts which I enjoy. They are both made by North American buddhist centres. The first is called DHARMA PODCAST and is by the Upaya Zen Centre – it has a zen-focus but is accessible to all. The sound quality is not always great as these are recorded live talks, but what it might lack in production values it makes up for in wisdom. The other one is The IDP PODCAST – this one is loosely based on Tibetan buddhism (as far as I can tell). It’s great – they have a really interesting array of speakers and subjects.

Finally, a very new podcast – there are only a few episodes so far – is from the arts blog ‘My Love For You Is A Stampede of Horses’ – Meighan O’Toole who writes the blog interviews an artist/crafter. The podcast is called MY LOVE FOR YOU. These short interviews (20-30 minutes) are interesting, relaxed and they reflect on a lot of issues around being an artist in the 21st Century. The podcasts are supported beautifully with visual material and links, too. I hope she keeps doing them, because I like them very much.

Whew! That’s it. I hope some of that was of interest.

Your turn – can you recommend anything to me?

* This title is a quote from ‘Transmission’ by Joy Division. I love the opening guitar-riffs of this song so hard that I feel kind of physically sick when I hear it. (I’m sure other music-nerds will get what I mean by that.) You can see a live version HERE or an amusing but really pretty bad cover version by Hot Chip HERE. In the mid-1980s, Wellington punk band Flesh D-Vice also released a cover of it. It was total shite.)