I feel like Easter crept up this year, partly because it is actually earlier this year and also because of the drought/summer that never ends. Although it is starting to cool off a little, I’ve only worn shoes and socks twice this year – most unusual! The hot days just keep coming. But here we are, suddenly it’s Easter and we have five days off our usual routines. We are staying home and I intend to potter in the garden, read books, watch some of Mad Men, season 5, and write. 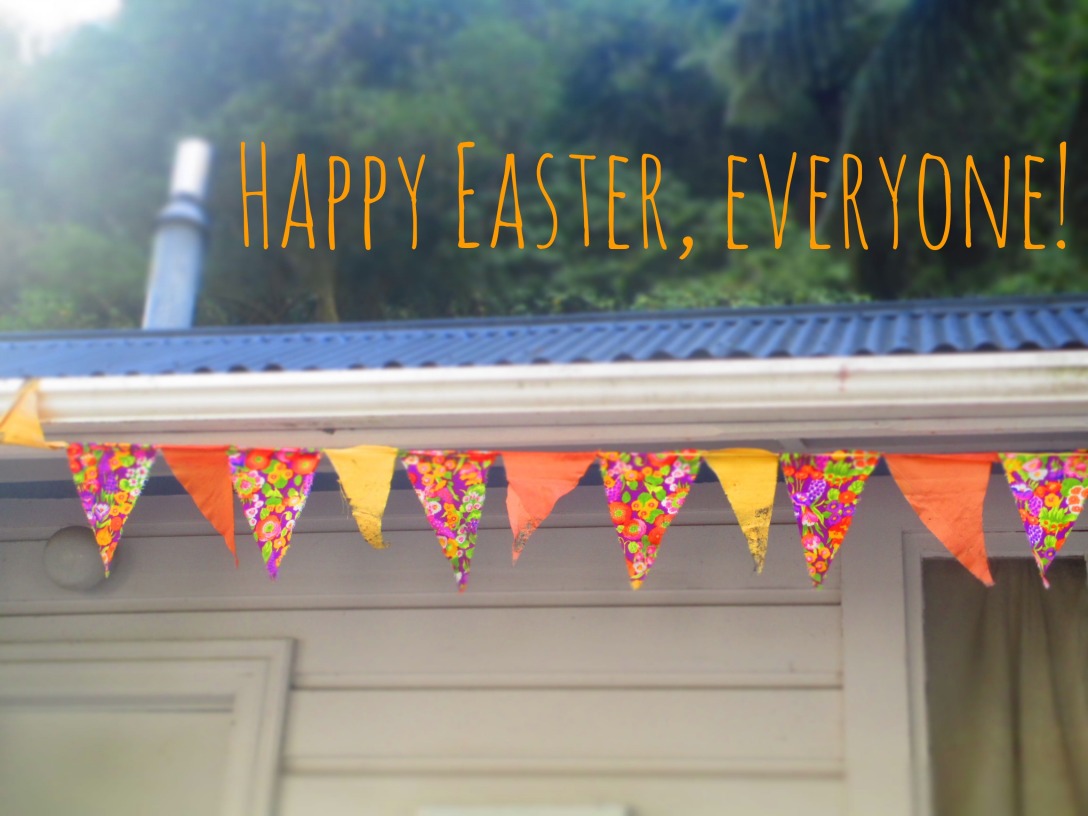 My writing has taken off over the last couple of weeks, which is a relief because I was feeling a bit barren and uninspired after the summer hols and obviously needed a good few weeks of thinking time before anything was ready to come out. Writing when there is no ‘flow’ is like trying to get lemon juice out of one of those hopeless lemons which is all dry and fibrous. I write and everything which comes out is either a) a rewrite of stuff I’ve written before b) self-pitying bullshit c) banal repetitious junk.

I don’t know if I ever mentioned it here but towards the end of last year I applied for and was accepted for the 2013 Massey University Visiting Artist programme. When you have kids, it’s pretty near impossible to uplift your whole family to move out of town for residencies, but this one is in my hometown so it works. (I am still hoping I can work out a way to do an out of town residency – homeschool the kids? But how much writing would I get done if I were in Wellington or Dunedin or Auckland homeschooling my children? Answer: not much.) I have the winter residency which starts late April and goes through until late July. The residency comes with a city apartment, which obviously I won’t move in to, but I am going to use it to write in during the day when the children are at school. I can’t wait! I can write at home just fine, but do get distracted by housework, gardening, the internet, visitors calling in….the internet, the internet, the internet. The apartment has no internet connection. Hoorah!

I had to write a proposal of what I would be working on as part of the residency application and (in short) I proposed ‘a creative response to environmental decline’. It is interesting writing down your intentions for writing, because to be honest, who really knows what will happen once you begin? Already what I imagined last November when I wrote the application is changing, but in a good way…my ideas are gathering steam and substance.

I get inspired by odd things – visual art a lot – I’m a very visual-oriented person, snippets of language I note down from disparate sources, texts seemingly unrelated directly to issues of ecology but which have a tangential, emotional link for me….gah, it’s hard to describe. But this beginning phase is very much a ‘collection’ phase. I’m reading a lot and collecting random stuff which is feeding into the writing.

Anyway, I thought I would use the blog as a place to record my experiences of the residency, just as my dear, clever friend Sarah did with her wonderful comics when she was the Frank Sargeson Fellow a couple of years back. I’m not as witty as Sarah and I can’t draw comics, but anyway, it’s as much for me as for you so forgive the indulgence of it.

My first ‘duty’ as a visiting artist is to give two talks, one in Palmerston North and one in Wellington – these happen before the residency even begins, in April. (More details about these to follow.) I get very nervous about reading/talking – despite years of teaching. You’d think I’d be used to it by now, but it’s always been something I’ve had to overcome some terrified, self-conscious part of myself to achieve.

Virginia Woolf’s ‘The Waves’ is one of the books which is really firing me up. When she started writing it she wrote in her diary: ‘I am writing to a rhythm, not to a plot’ and she was terrified at the beginning of ‘The Waves’, she had a notion of what she wished to achieve but no clear sense of how to go about it. Without wishing to suggest I am in any way similar to the literary giant of VW, that’s how I feel about what I’m doing now. At the moment it is a ‘sense’ rather than a clear plan – every day I try to find the courage to keep working through the vagueness and inscrutability to certainty and clarity, although I suspect the latter two will only come after the project is finished.

2 thoughts on “a sudden break”